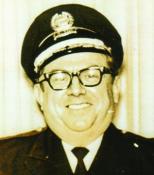 Lieutenant George Yaros was shot and killed while responding to an armed robbery at the Gary National Bank.

When he arrived on the scene, one of three male suspects shot him. As they fled to their getaway car, the same suspect shot Lieutenant Yaros at point-blank range. He was taken to St. Mary Mercy Hospital where he died.

A high-speed pursuit and shootout by police resulted in the suspect's car crashing into a tree. The shooter fled on foot and with the aid of bystanders was discovered walking nearby before being apprehended.

All three suspects were charged and convicted of murder, but the jury recommended death only for the 26-year-old shooter with the other two suspects being sentenced to 60 years in prison. The 32- and 29-year-old offenders were discharged in 2011 and 2012.

The offender was resentenced in 2008 to serve a 60-year term for murder and a 14-year term for armed robbery. He was released on a one-year parole in 2017 before being discharged.

Lieutenant Yaros was due to retire in six months to accept a job at the bank where he was killed. He was survived by his wife, son, two daughters and two grandchildren.